National-level Radical racing returned to the United States this weekend as the Blue Marble Radical Cup supported SVRA’s four-day Vintage Festival at Road America, June 18-21. After the first two events of 2020 were postponed due to the global pandemic, drivers were clearly keen to break their seven-month hiatus from top-level competition with 28 cars taking the green in each of the event’s three races.

The caliber of the field was further bolstered by the return of George Kurtz (2017 Pirelli World Challenge GTSA champion) and the addition of 2018 F2000 champion Steve Jenks with New York’s Group-A Racing.

With the proximity of Road America to Illinois’ Autobahn County Club, where Radical’s SR3 1340 is the most popular car, it was anticipated their members would dominate the 1340 class. While Chris Kemp (Team Stradale) qualified on pole for Race 1, it was clear the prediction would be challenged with long time MASTERS competitor Jim Booth (McDonald’s / WISKO Racing) second fastest after making the switch to 1340 this year.

Sporadic rain and a late full course caution in Race 1 resulted in a four-way fight for the podium places, which saw Kemp cross the line just barely in front of Booth, Mike Anzaldi (Emmett’s Energy / Anzaldi GP) and John Rante (Team Stradale). On the podium, Kemp was visibly emotional having taken his maiden series victory.

In the torrential conditions of Race 2, Booth’s years of Radical experience came to the forefront as he masterfully finished ninth outright– the only 1340 in the top ten– to take the class win from Kemp and Anzaldi.

Booth’s pace also gave him the class pole for Race 3, but that proved disastrous as it placed him in the middle of a start line incident, finishing his race literally as the green flag was still being waived. Avoiding the mayhem Kemp went on to claim his second win of the weekend, with Anzaldi and Rante completing the podium, and Bob Iversen (WISKO Racing) finishing a solid fourth.

With 17 cars, PRO 1500 was the most competitive class and produced amazing racing throughout the weekend. One Motorsports team owner Jeff Shafer reported Indy Al Miller had an air of confidence throughout the 3.75 hours of testing on Thursday, and didn’t want to “show all his cards”. However, hometown hero Schriber pipped the 2018 PRO 1500 champion in qualifying, while One Motorsports had to be content with setting the other four of the top five fastest times.

Louis Schriber (Team Stradale) fought back in the rain of Race 2 to challenge Indy Al Miller for the lead heading into Canada corner but spun in the process before recovering to finish second. George Kurtz gained another podium, while Gregg Gorski (Smokebuddy / One Motorsports) impressed in fourth and Palmer Miller surprised with fifth in his first ever rain race.

After the mandatory pitstops shuffled the order in Race 3, the two CrowdStrike cars of George Kurtz and Gerhard Watzinger were first and second, with Steve Jenks looking like he might claim trophy in his first Radical Cup weekend. However a fast charging Indy Al Miller had other ideas, and dispatched Jenks to give One Motorsports another clean sweep of the podium. Palmer Miller and Noah Ping again showed they would be stars of the future, finishing sixth and seventh respectively, and the former’s impressive debut was acknowledged with a special prize from Gulf Racing Fuels. 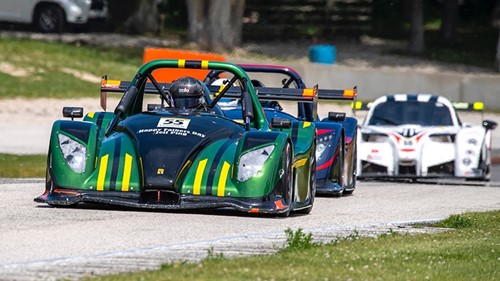 Reigning class champion Judd Miller (ESSES Racing) definitely arrived at Road America as the favorite but John Field (WISKO Racing) surprised many by putting the older SPYDER V8 on the outright pole. The straight-line speed differential between the slender SR8s and the wider SPYDER was on display at the start of Race 1 as both Dave Tweedlie (Team Tweedlie Racing) and Miller passed Field into the first turn. Miller then held a commanding lead for two thirds of the race until the late race showers caught him out in Turn 14. His spin prompted a safety car which led to an amazing moment of courage as Field passed both Terry Olson (Team Fury) and Tweedlie around the outside of Turn 1 to take the win. Miller recovered to finish fourth in class.

With rain falling and frantic work being conducted by all the teams to change onto wet tires on the grid, Olson was noticeably calm before Race 2. As the wet conditions caught out Field and Tweedlie, Olson showed he was in a league of his own. Even a redeeming drive from Miller (2nd) couldn’t topple the Team Fury driver who won by a staggering 19 seconds. Recovering from his early spin, Field brought home his wounded car in third.

Inspired by his Saturday afternoon drive, Terry Olson never looked back in Sunday’s sunshine, and claimed victory in Race 3 with another brilliant drive. Behind him though, disaster struck Judd Miller, whose throttle cable broke as the green flag flew and John Field was sidelined by a mechanical failure after a solid first stint by son Clint. Dave Tweedlie scored another second place with a strong run and clean pitstop, while Conrad Park completed the podium, meaning ESSES racing still had something to smile about. 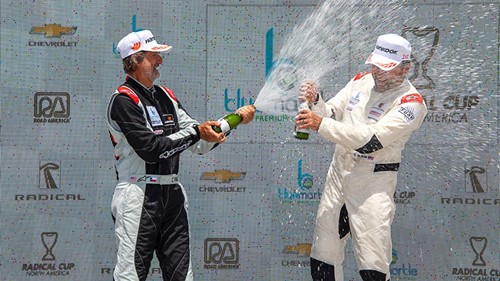